Note: I was not paid or offered any goods or services in exchange for this review. I opted to take advantage of introductory month offers at both ClassPass and Fitmob and decided to share my review here.

I love a good workout class. Whether it is boot camp, barre, spinning, yoga, or something different, there is always something about a fitness class that is good for motivating me not only to actually show up to workout but also to challenge me to work muscles I wouldn’t normally work if left to my own devices. And there is always something so satisfying about that perfect level of soreness you experience when you got a good workout in. I’m not talking about a debilitating level of soreness but rather that soreness that says “you rocked your workout yesterday and you are on your way to increased strength and stamina!”

Workout classes are also great for staving off boredom and allowing you to be flexible in your training. Feeling a little sore after an intense long run? A yoga class might be just the thing you need. Or feeling like you’ve been too heavy on the cardio? Maybe it’s time to throw in a kettle bell class or a boot camp. But seeking out different classes can be a challenge because different classes are usually at different studios with different fee structures. It can get expensive if you want to engage in different workouts at different studios each week. It doesn’t usually make sense to take on a package at any particular studio and paying a la carte and spending around $20 per session can bust anybody’s budget.  But now there are two new products on the market that make working out at multiple studios a breeze: ClassPass and Fitmob.

Aside from the differences in cost, here are the other differences between the studios along with my assessment of which is better:

When I tried ClassPass, the window for cancellation was 24 hours in advance of the class while Fitmob’s cancellation window was only 12.  I found the 24 hours to be an onerous requirement but I just learned that ClassPass has now implemented a 12 hour cancellation window. Even 12 hours is a little difficult and I think 6-8 hours (as is actually standard at most workout studios) would be better. I understand the need to open up spaces in a workout class for those who might have been on a waitlist, however, we all have days where something comes up the night before an a.m. workout or the morning before a p.m. workout. In those situations it may not be possible to cancel 12 hours in advance but it would still be possible to cancel with enough notice to allow somebody to fill the open slot.

The verdict: Tie (now that ClassPass has implemented the 12 hour cancellation window instead of the 24 hour requirement).

Both ClassPass and Fitmob allow users to find and register for classes via a website or via an app that you can download to your phone. Both interfaces allow users to search for classes by date and time and to search for studios in a given area. Both also allow users to display their upcoming class schedule. But Fitmob’s inclusion of a map with studio locations pinned made it much easier to search for workout classes near me.  Aside from not having a map on the class search screen (although you can click to go to one) ClassPass also made it difficult to find classes at times because the “neighborhood” field next to each class is often blank. Frequently I’d find a class that sounded interesting and click on it to learn more details and then be disappointed to learn that the studio was way out in the suburbs. With Fitmob’s map, there was never disappointment. I always knew immediately whether or not a studio was nearby.

Both programs send you emails confirming that you are registered for a class. ClassPass also offered the ability to add a class to your Google (or other) calendar once you had registered but Fitmob did not. I really liked having all the details of an upcoming workout automatically added without having to manually type the class name, time, and studio location. 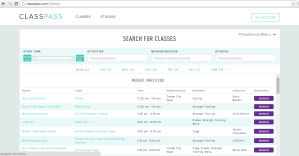 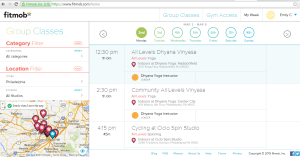 The verdict: Fitmob’s interface was better although I liked the link to calendar that ClassPass provided.

The number and variety of classes offered:

ClassPass and Fitmob both offer a variety of classes. In the Philadelphia area (both in the City and in the surrounding areas), ClassPass offered substantially more classes than Fitmob. ClassPass offered classes at all of the studios that I already frequented and loved as well as a few studios near my office that I hadn’t previously tried. Fitmob on the other hand, only offered the ability to attend classes at two studios that I had previously tried and there weren’t any options near my office. Fitmob did, however, offer the ability to reserve some time at a gym.

Both ClassPass and Fitmob currently allow users to sign up for classes in multiple cities. Although I didn’t get to try this out, as somebody who travels a lot for work, this is a nice benefit. Fitmob’s interface would certainly make it easier to find nearby classes when you are in an unfamiliar city.

Both products allow users to cancel fairly easily. ClassPass requires users to send an email with 15 day’s notice (before your next billing cycle begins).  Fitmob allows users to cancel just by clicking a “cancel my plan” button under account settings on the website.  ClassPass allows users to put an account on hold for $19 a month (and you may still register for one class for the month while the account is on hold). Fitmob also allows you to place your account on hold for a minimum of two weeks. Your first hold is free and after that the hold is $.50 per day for each day your account is inactive (which would work out to $15 per month). But Fitmob doesn’t allow you to take one class while your account is on hold.

The verdict: Tie. Fitmob makes it easier to cancel and the fee for placing an account on hold is less, but ClassPass allows you to still take one class in exchange for the fee you pay to place the account on hold.

Although there were things I preferred about Fitmob, ClassPass’ variety of studios and classes (and the fact that it include so many studios that I already know and love) makes it the winner.